This one is for the kids.

Most of you kids know a lot about dinosaurs. You know about Tyrannosaurus Rex, Stegosaurus and Triceratops. You not only know how to pronounce their names, but you know how big they were, what they ate and when they lived. I am a grandfather, I do not know any of that stuff.

But I do know about Fred.

You know that most dinosaur bones were found in other places and there is no record of any found in Ontario. Mastodons are a different story. There have been over one hundred discoveries of mastodon and mammoth remains in Ontario, most of these being limited to a tooth or tusk fragment. The really big find, the one that is now in the Royal Ontario Museum, was found in Wainfleet. I call this mastodon Fred.

Fred was not a mammoth. That was a different animal. Fred was a mastodon. You probably know how these animals were different. I dont. I am a grandfather, remember?

Try to look back about 10,000 years. Picture Fred strolling along the Forks Road, probably eating daisies. Fred is old; he lies down for a nap in the sun and never wakes up.

Now jump forward to 1911. Mr. Harry Smith, a Wainfleet farmer, is digging a new pond and he finds what he thinks is a large horn. Mr. Smith keeps digging and ends up with a large collection of bones and teeth. No one knows what these are. On October 24, 1911, the Welland Telegraph published a front-page story with the headline "Science has failed to identify monster bones found on Forks Road farm". Things were different in 1911 and kids did not have access to the knowledge they have today. Today, any of you kids could have told Mr. Smith about mastodons.

Now think about it. If Fred died on the site of a Forks Road farm, what are the chances that he wandered all over this area in his lifetime? Did Fred eat daisies on what is now your front lawn? Did Fred poop on your soccer field? Lets try to find out what the chances are.

Go get your telephone book. In the yellow pages section, on pages 6 and 7, there is a Regional map. Find Welland and also find Port Colborne. Half way between you will find Dain City. Got it? Good. Now, from Dain City, trace your finger left along Forks Road towards Chambers Corners. You now have to jump to page 6 and keep going past Winger. You are looking for Flanagan Road, which goes south. Got it? Draw a circle around the intersection. This is about where they found Fred. If you can now find where your house is on the map, you can see how close you are to that spot. I bet Fred did poop on your soccer field!

Do you want to see a picture of Fred? I did, so I contacted Dr. Kevin Seymour of the Department of Palaeobiology at the Royal Ontario Museum (the ROM) for help. He told me to go to their website at www.rom.on.ca. There is a button for "Images" and it leads to another for "Subjects". Now click on "Dinosaurs". There you will find 24 pictures and Fred is number 22. Yes, I know that Fred was not a dinosaur and so does Dr. Seymour, but he did not design the website.

The ROM website also says Fred was discovered in 1912, but we know it was 1911. Maybe they will fix this but hey, in the Palaeobiology business if you get within five thousand years, its close enough.

Fred is unique in that he apparently only had one tusk. Some articles speculate that the other tusk was lost in a fight, but the ROM study of the bones indicates that Fred had a birth defect that resulted in being born with only one. Now, if you see pictures of a mastodon with two tusks, you know that it is not our Fred. Our Fred was special.

You can find out more about Fred at the Wainfleet library. They have a reference book, (you cannot take it out) called "Chronicles of Wainfleet Township" and it has an article about the find. You can also look at copies of the 1911 Welland Telegraph at the Welland Library.

You might want to write your own story about Fred. Did the other mastodons laugh and call him names because he only had one tusk? Did he have brothers and sisters? Did he have friends? Use your imagination. Maybe your class could do a project.

And, when you play soccer, be careful where you step. 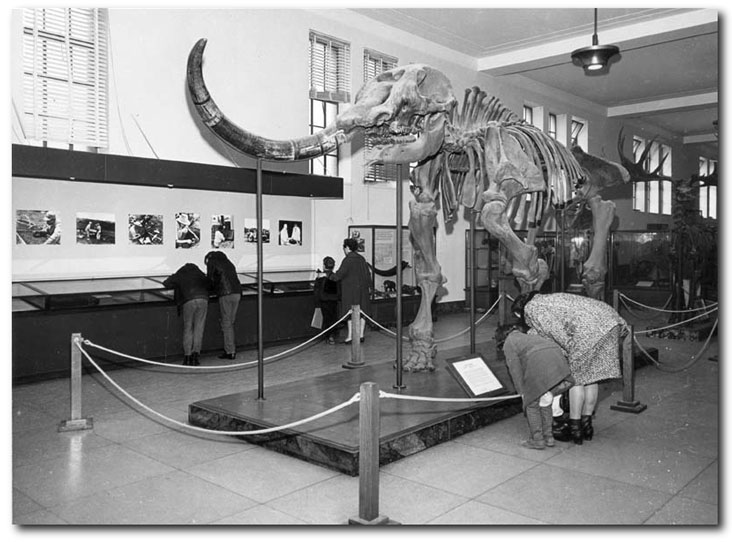